With a little over 100 days to go until the return of Super League, the full fixture schedule for the 2023 Betfred Super League season has been released.

The regular season in 2023 will see each team will play 27 fixtures – 13 home and 13 away, plus Magic Weekend at St James’ Park, Newcastle.

The first weekend of broadcast games is rounded off on Saturday 18 February with Hull KR against Wigan Warriors, live on Channel 4. 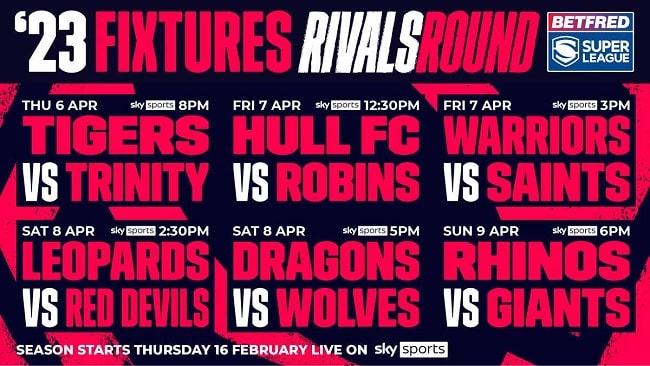 Easter Weekend is set for a bumper round of fixtures as Rivals Round takes over once again, where for the first ever time, all six games will be live on Sky Sports. The action starts with a West Yorkshire rivalry as Castleford Tigers host Wakefield Trinity on Thursday 6 April.

Magic Weekend returns to St James’ Park on 3 & 4 June and tickets are on sale now with a fantastic opening offer of 50% off all categories including Weekend tickets, until Sunday 6 November.

The climax of the season, the Betfred Super League Grand Final, will once again take place at Old Trafford on Saturday 14 October. Tickets for this event will be available from Sunday 20 November. Full details will be listed at superleague.co.uk.

Super League and St Helens continue to work with the NRL to finalise arrangements for a World Club Challenge game to be held across the weekend of 18/19 February.

Further announcements will be made in due course and as a result of St Helens’ possible involvement in the World Club Challenge, their Round 1 fixture against Huddersfield Giants will be postponed and re-arranged at a date later in the season.