Rugby League over 4 continents in 10 years.

ERL caught up with Luke Srama in a wide-ranging interview discussing the challenges, achievements, frustrations and aspirations over the years.

Luke’s career is proof that the game of Rugby League is more than just NRL and Super League, having played club Rugby League in France, USA, Australia and England.

Growing up in Brisbane, Rugby League has always been a big part of Luke’s life. A fierce rivalry with Brother Matt (who later went onto make 65 appearances for the Gold Coast Titans) helped to hone the crucial skills required to forge a career in Rugby League.

“I’m 6 years older than him (Matt) and myself being bigger than him growing up really helped his tackling technique and bring out the competitive edge. We’d play for hours in the front yard, I’d really put big shots on him, I’d let him hit the lead so would bring competitiveness in myself to catch up and beat him as well as him beating his older brother with confidence, we’d play and play till I’d hurt him them we’d go in the back yard then put the boxing gloves on.”

It wasn’t long until other kids Luke’s age experienced growth spurts though. Luke has spent his whole career being smaller than most other players in his team. A lack of size has brought out an admirable determination to not let anything get in the way of the goal of playing Rugby League for a living. Whilst falling just short of playing in the NRL, Luke’s resume is as extensive as it is impressive.

“I’ve been small growing up but hitting teens I didn’t grow. I probably started weights too early striving to make it, but I’m 158cm so I’m definitely not the biggest on the field but make up for it in my strength, speed and fitness though”.

“My height and size have been big battles growing up but a positive thing it moulded me into who I am today, being super competitive and striving to prove people wrong. But for the Coaches and Scouts during my time that wouldn’t pick me because of my height or say I wouldn’t make it created the fire in me to prove them wrong. I may not have made the NRL, but I have achieved everything else in the game and I look back and am proud of my achievements and who I am now as a person, coach & mentor for many in Rugby League world.

There’s no doubt that Rugby League has seen a rapid increase in the size and weight of kids playing the game in the junior ranks. This has prompted the NRL to recently announce a new non-contact form of Rugby League aimed at keeping smaller kids in the game. Given his size, Luke is in a rare position to comment on whether or not this is the solution to the problem.

“Personally, I don’t like it…first of all Defence is dying from our game, kids’ mentality and attitudes are changing. Smaller kids and all kids should be taught how to tackle properly which will promote confidence. Fix the situation not the game, that’s my view”.

2002/03 saw Luke juggle multiple commitments as the demands from both school and Rugby League increased. His career looked to be on track to achieve the goal of playing in the NRL. Luke was named Player of the year in the Premiership winning Brisbane Broncos Cults (U18’s). The achievement helped earn Luke a scholarship with the St George Illawara Dragons.

Fast forward to 2005 where Luke got his first opportunity to play Rugby League outside of Australia, being picked for the Australian Tertiaries team to tour the Pacific Islands to take on teams from Tonga, Samoa New Zealand and Fiji. This was the first of many times Luke would play Rugby League in different countries.

As the years went on, Luke continued to play Rugby League, often just for the love of the game. In his mid-twenties, the opportunity came up to live and play rugby league in Florida for the Jacksonville Axeman. This was followed a year later in England where Luke won player of the year for UK Conference team Coventry Bears.

The biggest honour of Luke’s career came in 2012 when he was named Captain for the Philippines Tamaraws first ever game. This bought about a new country for Luke to play Rugby League in, adding to what was fast becoming a diversified list. The game was played in Bangkok Thailand with the Tamaraws easily winning 86-0. 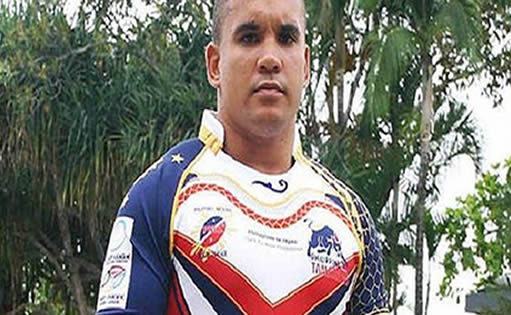 “I’ve been there since the start as the inaugural Captain in 2012, where we struggled for 15 players but now have grown and grown to where we now have hundreds of players and are identified globally, have a growing domestic competition… a Woman’s team, U16’s, U18’s Juniors and Development Admirals along with gaining more and more exposure which the game needs. But funding is a big factor for PNRL though. Since 2012 our actions on the field have gained great momentum but we spend thousands of dollars each tour and test to represent our country which a lot don’t know… like other nations do too”.

At club level, Luke spent 2014 playing in France, turning out for Réalmont and Toulon.

“In France definitely the whole culture shock and language barrier was tough. I tell all players when heading to France that it will be very tough at first. Some boys have been on the phone to myself wanting to leave, being upset. Just getting over the hurdle at the start and experiencing the culture and realising you get to play Rugby League in another country… I get so many players that would want to swap places with them and they get so thankful and grateful in the end. I feel my actions win respect after the first games or first tackle I make”.

Quickly progressing through his late twenties, Luke started to think about idea of making use of his knowledge and love of Rugby League outside of the playing sphere. This is how Srama Recruitment came about. Filling a gap in the market, Srama Recruitment helps connect Rugby League clubs and organisations with talented people suited to roles such as captaining and coaching rural rugby league teams.

“Srama Rugby League Recruitment has grown and grown over the years. I literally woke up one night in 2013 and wrote down an idea and went from there. I’ve gained a lot of experience over the years at all standards, meeting a lot of Rugby League connections and making plenty of friends in the Rugby League World, assisting clubs find players, coaches find clubs. Also assisting international teams, mentoring players onto higher standards and having players places to all over Australia from local Competitions in QLD, NSW, VIC, SA, WA, higher standards in the QLD Cup, NSW Cup, internationally in UK League 1, UK Championship, UK National Conference Leagues, France Elite 1, Elite 2 and National Divisions, USA Rugby League, Canada, Serbia and so on… Anything needed in Rugby League I try to assist where I can.

Recently, the RLIF announced an in principle 8-year rolling calendar for international rugby league. Having played the game is so many countries, Luke, yet again, is in a rare position to comment on how far he thinks this goes to addressing what the game needs to grow.

“We’re definitely going in the right direction now with having the Emerging Nations, a proposed World 9’s, players representing Pacific Islands, England doing well, France winning the European Championship, Chile being a part of the America’s World Cup Qualifiers, USA local development, Canada’s exposure with the Wolfpack and their domestic league, the game in Asia growing and Red Star Belgrade (inclusion in the Challenge Cup) so it’s definitely refreshing knowing the International game is getting positive exposure.”

On the flip side, Luke went onto elaborate what we all know. Rugby League still has an unimaginable amount of work still to do to fulfil its potential on the international stage.

“A lack of funds is holding the game back like a lot of things in life. My goal, what I’d like to see for a World Cup would be your big nations represented but then rest of the nation’s play an Asian Cup, America’s Cup, European Cup etc then pick Representative sides from these teams to represent on the World stage which would assist in the strength of teams as well as funds and sponsorship etc. One thing I’d love to see is International Rules being played globally… The NRL has its own rules as does the Super League, the French competitions and so on but we’re teaching International Rules in emerging nations but they’re viewing different rules on TV. I loved watching the World Cup with one referee, no wrestle, fatigue and errors in the game. 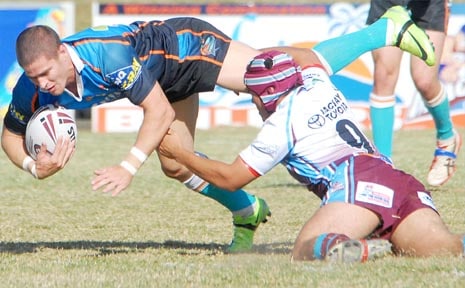 Rugby League players only tend to join the mainstream workforce after retirement. This puts them behind the eight ball in terms of careers outside of the game. There’s no doubt the game has come a long way in terms of players being equipped with tertiary or vocational training. Despite the image out there of Rugby League players earning millions of dollars, the reality is quite different.

“I’ve had my words to NRL and I’ve been doing a lot off my own back for many years assisting our game. A lot of Country Rugby League competitions are struggling but having a retired NRL player head to a competition to play or coach a struggling club and set them up with career work would increase participation, sponsorship and exposure as well as life experience and employment for the retired player. Even with my role at Sydney University RLFC it was great as we had scholarships for retired players to set them up for life after footy.

I’ve assisted clubs securing players Mining jobs, set them up with a career, even assisted players in areas like a Young Guns Container Crew to play and work overseas in Canada or here in Brisbane, there’s so many things that we can do for retired players. Mental health is a big thing in our game. I myself have had moments when I was younger with injuries, footy setbacks and so on but I came out the other end stronger. It’s getting more frequent with players going the other way. It’s sad but we’re all trying to do our bit for the game. Just being an avenue for Players, Coaches and Clubs to speak to me, I try my best as a mentor or to be of assistance to everyone. I get hundreds of messages each week across all forms of media, but I eventually get back to everyone as something little can mean a lot for some and if Srama Recruitment can assist in some way in life after footy or in going down another route then it’s something for our great game. I’d love an Employment role in the Rugby League world, but as I say to all I coach, keep in the grind keep chipping away and something positive will come your way so hopefully one day someone will see everything good I do and something will come of it.”

Outside of the NRL and Super League, there is one thing that Luke is yet to achieve; Luke’s mother is Philippina with his father being Polish. This makes him eligible for Poland as well, the irony being that Polska XIII defeated Philippines 14-10 in the final of their trophy division of the 2018 Emerging Nations World Cup.