England’s Wheelchair Rugby League squad will visit memorials and battlefields in the Ypres Salient area of Belgium, scene of several notorious battles during WWI where hundreds of thousands of British and Commonwealth, French and German soldiers lost their lives.

Ypres Salient became one of the main theatres of war on the Western Front, where battles such as Passchendaele (1917) epitomised the relentlessly muddy, bloody and brutal trench warfare of the day.

Squad members will visit Passchendaele Museum, and pay their respects to the fallen at the Tyne Cot Commonwealth War Graves Cemetery and Memorial to the Missing – the largest cemetery for Commonwealth forces in the world. Later in the day they will hear the last post played at Ypres’ Menin Gate, where traffic pauses at 8pm each evening while buglers of the Last Post Association play beneath the Memorial arches.

🌎 Working together to support children in the UK and in Brazil

We’re excited to be celebrating our partnership with UNICEF UK this week.

Prior to travelling, each squad member is assigned a ‘fallen hero’ – somebody who made the ultimate sacrifice during the Great War. Squad members also receive an explanatory booklet about the Ypres Salient, its battles and its connections with Rugby League clubs through ‘fallen heroes’ such as Patrick ‘Paddy’ O’Neill. O’Neill, a Northern Union League and Cup winner with Leigh (1905/06) and Dewsbury (1912) respectively, was killed in action on 27 September 1917, aged 35, leaving behind his wife and two children.

Head coach Tom Coyd says: “The aim of the trip is to help players understand the deeper meaning of what it means to represent England – to make a connection between representing one’s country at sport and those who made the ultimate sacrifice. We call our programme ‘This Moment Matters’, and each squad member is asked in advance to think about their own fallen hero, and to reflect during the day on their own values as they prepare to represent their country at the World Cup.” 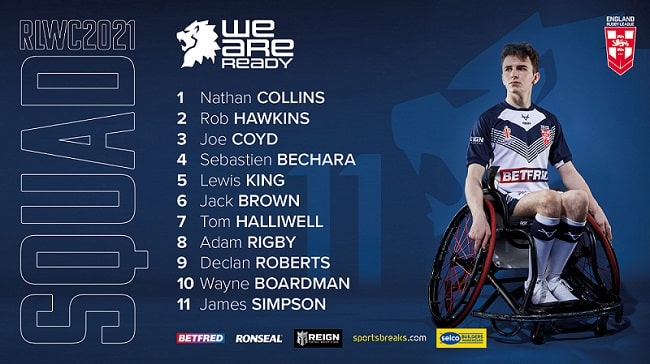 On their return from Belgium the England squad will go straight into camp to prepare for their opening match of the Rugby League World Cup.

England have been drawn into Group A and will contest all three group games at London’s Copper Box Arena:

Round 1: England vs Australia, Wednesday 3 November 19:30

Tickets are available here, grab them while you can!