Tom Johnstone on the difficult decision to leave Wakefield

Tom Johnstone will make his return to Wakefield in round one of the 2023 Super League season when he comes back with Catalans Dragons on February 17.

Johnstone departed Trinity at the end of the 2022 campaign, signing a two-year contract with the French club, after eight years and more than 100 games for Wakefield.

The winger admits he is unsure what reception he will receive at the Be Well Support Stadium next month, when the Dragons open the season away in west Yorkshire.

“I’m hoping it will be friendly,” he told Everything Rugby League.

“I don’t think it will be too great when I walk out on to the pitch with Catalans, if I’m playing.

“But I’ve got a lot of friends there that I’ve known for a long, long time and so I’m hoping I’m welcomed warmly.

“I don’t expect it during the game, but after, whichever way it goes, it will be just nice to catch up with people. Hopefully they’re not too harsh on me.”

Johnstone made his name with Wakefield, winning Super League Young Player of the Year there in 2016 and his sole England cap in 2018.

The 27-year-old admits it was a difficult decision to leave the club and move on after so long. 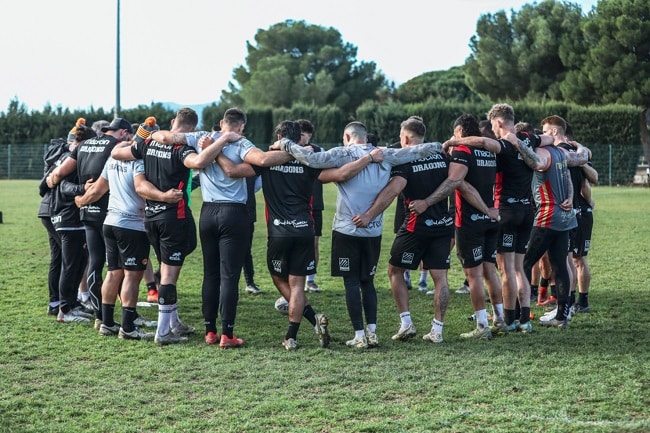 “It was tough. It took me a while to decide to leave,” he said.

“I went back and forward a few times. One week I went ‘no, actually let’s stay, settle down, maybe see out my career in Wakefield’.

“Then just another part of me was a burning desire and ambition to try something new.

“I always said if I was going yo try something new it had to be different – I didn’t want to just go down the road to Huddersfield or Leeds or something.

“Without trying to move to Australia or anything like that, this was the perfect spot for us.

“I’m quite a home and family bird, so I know I’ve country and moved away but it’s only two hours away, so it’s just a perfect thing.

“And when I was unsure about going or not once I’d spoken to Steve McNamara, and other players at the club like Sam Tomkins, it just seemed the right decision for me and my family.

“My partner’s the same, she said ‘look I want to go’. We just thought then let’s dive into it and try it.”

Johnstone is enjoying his time in the south of France, embracing a new lifestyle and getting to know his new teammates.

“I’ve loved it all, so yeah I made the right choice.”