Penrith Panthers star Brian To’o has given a massive boost to Toa Samoa ahead of the opening World Cup clash with England after declaring he would turn down a Kangaroos jersey to represent the Pacific nation.

To’o is one of up to eight members of last year’s NRL premiership winning team who are set to line up for Samoa, including fellow NSW State of Origin backs Jarome Luai and Stephen Crichton.

There were four Panthers players – Charlie Staines, Taylen May, Izack Tago and Spencer Leniu – in the Samoa team which beat Cook Islands 42-12 in the June 25 Pacific Test at Campbelltown Sports Stadium but To’o, Luai and Crichton were playing for the Blues in Perth.

May’s brother Tyrone, who this season joined Catalans from Penrith, is also likely to be in contention for a place in Samoa’s World Cup squad.

Luai and Crichton had previously indicated that they were likely to play for Samoa at the World Cup, but there was uncertainty about which nation To’o would commit to if he had to make a choice.

The 23-year-old – who led the NRL for run metres last season, averaging 245.9m per game – played for Samoa in 2019 but would now be an almost certain selection for the Kangaroos.

However, he has committed to playing for Samoa at the World Cup.

“Most definitely I will be playing in the World Cup and I am going to be putting on the red and blue jersey of Samoa. I am committed to Samoa,” To’o told former England captain James Graham on Sydney’s Triple M radio. 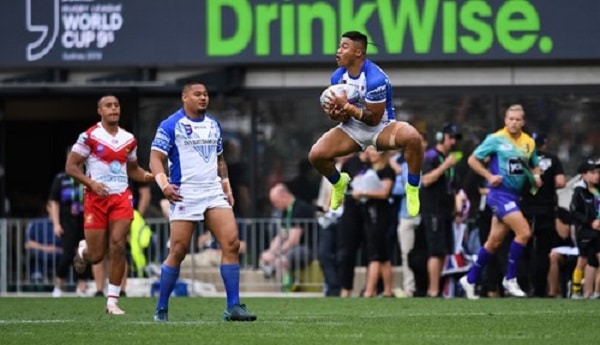 Asked what he would do if approached by Australian coach Mal Meninga about a place in the Kangaroos squad, To’o said he wanted to represent his heritage.

“Obviously it would mean the world to me to put on the [Australian] jersey,” he said. “It is a massive opportunity to play for Australia, but my heart is everything to me and my people and my family mean more, so I will definitely play for my family.”

Samoa play England in the opening match of the rescheduled tournament at St James Park on October 15 and are in the same pool as France and Greece.

May, who has scored 14 tries in 15 matches since making his NRL debut at the start of the season, said the opportunity to play with so many Penrith team-mates for Samoa would be a dream come true.

“It is a big thing for us, we do talk about and I really hope the boys all come back and play for us,” he said.

“I am still starstruck about that sort of stuff. I have only just started playing NRL and now to get to play for Samoa, I am very grateful and honoured.

“Watching Tyrone play and just seeing how the fans get around it, especially with the culture, it is something I have dreamed about. My mum is Samoan and it was pretty big for our family, especially when my mum’s dad was alive.

“I just think growing up in the [Penrith] area, there are a lot of Pacific Islanders. I knew Rome [Luai] and that before I was playing NRL. To know that they are Samoan too is amazing.”