Australia’s World Cup prospects have received a boost with injured superstar Tom Trbojevic pushing to be available for selection.

Whilst Tonga have suffered a double blow after Sione Katoa and Sitili Tupouniua were ruled out with season ending injuries.

Trbojevic underwent surgery in May after dislocating his shoulder in Manly’s round 11 clash with Parramatta and was expected to miss the IRL World Cup in England later in the year but the 25-year-old is aiming to return during the NRL finals series.

If available, Trbojevic would be an almost certain selection by Kangaroos coach Mal Meninga, who could use the pool matches against Fiji, Italy and Scotland to ease him back into fitness and form ahead of an anticipated semi-final showdown with the Kiwis.

“There’s talk that Tommy could be available, which would be great, so we will see what happens,” Meninga said.

Sea Eagles coach Des Hasler said it was too soon to say when Trbojevic would return but confirmed that he was hoping to play at the World Cup.

The 2021 Dally M Medallist played in Australia’s end-of-season Tests against New Zealand and Tonga in 2018, partnering Latrell Mitchell in the centres, as he did for NSW in last year’s State of Origin series victory.

The pair missed the recent 2022 Origin series, won by Queensland, and many believe the result could have been different if they had been played. 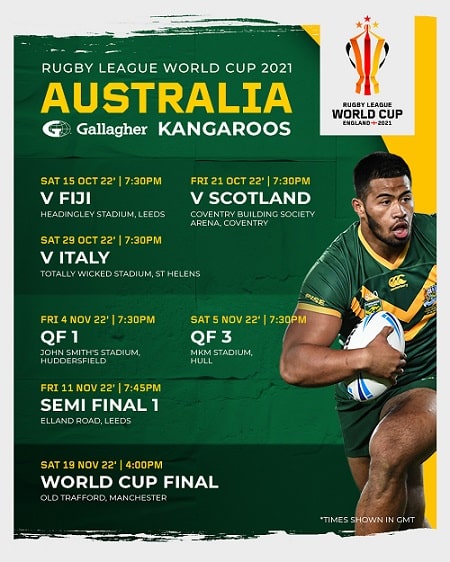 Trbojevic has recently returned to training in the gym and he told Sydney’s Daily Telegraph that he hoped to return in the second or third week of the NRL finals series, if Manly qualify.

“I would also love to go to the World Cup if Mal picks me. I definitely would. I don’t expect to be picked but I’m hoping to at least be available,” Trbojevic said.

“I’d certainly put my hand up but I’d also have to have a chat with Manly to see where they sit on the World Cup.

“It’s a hard one. I’m hoping to be available later in the season and we’ll see what happens from there.

“All I can do is continue getting stuck into my rehab and if any opportunity comes, then I’d be good to go. I just have to keep pushing forward.”

Hasler said there was no time frame at this stage for when Trbojevic was likely to return to playing.

“We’ll have to see what happens. I think any player would like to say that they’d like to play at the World Cup, but at the same time, he’s respectful and those decisions are a long way away,” Hasler said.

“The great thing about Tommy is he’s pretty intelligent, pragmatic and practical about it, so we’ve just got take a deep breath and continue with what we’re doing. We haven’t put any timeframes around the recovery rate.

🏆 Have you started your collection yet? @Jodie_cunny is here to explain everything you need to know about RLWC2021’s Digital Collectables!

“What was outlined was more from a medical perspective, so there’s still a fair amount of work to be covered off, but it’s good to be optimistic. That’s the sort of kid Tommy is. He loves his footy and he’s keen to play footy.”

Meanwhile, Tonga coach Kristian Woolf will need to consider replacements for Katoa and Tupouniua after the pair were injured last weekend.

Katoa, who has scored 14 tries in 16 games for Cronulla, suffered a pectoral injury while scoring the match-sealing four-pointer against the Cowboys and will undergo season ending surgery.

Katoa and Tupouniua played for Tonga in June’s Test against New Zealand at Mt Smart Stadium.