Developing rugby league in new territories is tough and sometimes frustrating work that often goes unheralded outside of close friends and family.

Running a club or competition is a roller coaster ride with barriers popping up at every turn. Sustained participation is the ultimate goal but sometimes you just have to hang on for dear life.

Sweden once boasted three rugby league clubs. That number has reduced down to one with the Skåne Stags currently the only active rugby league team in the country.

Sebastian Johnson-Cadwell, a 45 year old British Swede who covers the roles of Coach/Manager/Player at Skåne Stags, explains that “rugby league in Sweden is going through a difficult patch” at the moment.

“Being the only team in the country makes finding games – the main reasons players train – a difficult job.”

Games have been so difficult to find that in 2018, Skåne Stags travelled to Poland, for their only fixture of the year against a Polish XIII hosted by Sroki ?ód? Rugby League.

This year they have doubled their number of matches by securing a home game against local rugby union club the LUGI Lions who agreed to switch codes for the fixture.

It was the connection and shared love of rugby league with Czech Republic counterpart David Lahr, who previously coached the Vrchlabí Mad Squirrels, that set the course for the next game.

“It was our privilege to host Stags in Vrchlabí,” Lahr said

“I have great long friendly relationship with players Ashley Brown and Paul Briggs. We spent a lot of time together in many coaching courses around Europe. Paul and Ashley have shared their rugby league knowledge here in Vrchlabí three times.”

The friendship between Lahr and the Skåne Stags is so strong that Lahr agreed to lace the boots up for the opposition after discovering they were short on numbers.

“Playing for them was a pleasant obligation in return (for the help they have given me),” Lahr explained.

The result ended up a 21-16 win to the Stags. Greek international winger Nikolaos Kourkakis who divides his time between Greece and Sweden, scored two tries and was declared man of the match.

“It was a close game in the beautiful Czech countryside, in great facilities with a great crowd. It was a very physical game and the team with the most aggression, the team that wanted it more, won it,” Kourkakis said.

Veteran team mates Paul Briggs and Paul Rhys clashed heads during the game. Both players declared it will most likely be their last game after finishing worse for wear. The victory gives the Stags a 100% winning record over the last two years and three matches. 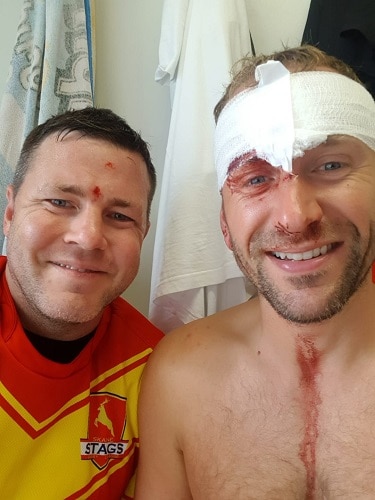 David Lahr and the Czech Republic have games against the Polish under 20s and a senior international against Balkan heavyweights Serbia to look forward to on August 24 at Vrchlabí. While rugby league is in a healthy position, with ten clubs and teams across age groups in the Czech Republic, Lahr is seeking passionate people to help out and potentially reduce his workload.

“For the last couple of years the Skåne Stags have run 30-40 training sessions per year in Malmö, including fitness sessions over the winter when pitches become unavailable,” he said.

“Stags only continues because of the dedication of the players and coaches who train/travel and put effort in to keep rugby league alive in Sweden.”

If you are interested in being involved with rugby league in Sweden or Czech Republic as a player, coach or administrator please contact the clubs.