Why State of Origin eligibility rules must not change

Over the years there have been calls for the International and State of Origin eligibility rules to change.

Some argue that the rules should be made more strict while others believe that players of all nations should be able to play Origin.

However, when you take the time to consider the benefits of the current eligibility rules it is hard to dispute that they are fair and cater towards both the International game and State of Origin.

When looking at how eligibility rules impact the International game they can only be seen as a positive.

The current rules favour a strong pool of International talent which this year has led to the closest Rugby League World Cup that has arguably garnered more mainstream interest than ever.

Diehard Rugby League fans may find this hard to believe as they are used to watching the game only be played predominantly in the north of England and on the east coast of Australia but the world’s most notable and popular sports have a strong International presence with the obvious examples being football (soccer) and basketball.

Rugby League also needs to do all it can to keep the International game strong to keep within touching distance of Rugby Union, the sport that over the years has held the global growth of Rugby League back on multiple occasions.

The current eligibility rules not only benefit the International game though as State of Origin has also been allowed to feature some of the game’s best talent as a result of both states being able to field players who represent tier-two nations. 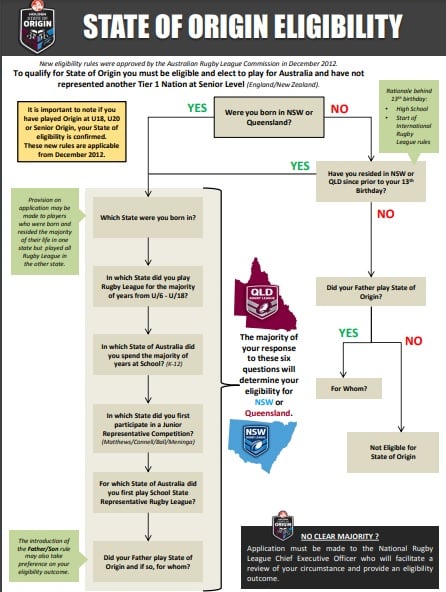 People are worried that the current rules will eventually lead to New South Wales and Queensland being represented by players who are not from either state but that could not be further from the truth.

Most players who are currently eligible to play State of Origin and for a tier two nation are born in the state that they can represent.

They are as much a New South Welshman or a Queenslander as their fellow statesmen who are only eligible to play for Australia.

State of Origin is also Rugby League’s greatest global export as it is watched by millions around the world, with the three-match series between the Blues and Maroons seen by many internationally as one of sport’s greatest rivalries.

It is crucial that the best talent possible is on display for the one Rugby League concept that is watched worldwide.

At the end of the day, fans should be focused on what best promotes our game to a bigger audience so that it can grow and thrive for years to come and the current eligibility rules best achieve that.