At a recent Women’s Super League match between the York City Knights and Wigan Warriors no less than five French players took the field.

Lining up for Wigan at centre was 23 year old Lauréane Biville who has been playing for her national team since she was 17, while on the other side York fielded four players from the Déesses Catalanes club who all represented France against England in July.

York Knights Director of Rugby Lindsay Anfield told Everything Rugby League Elisa Akpa, Anais Fourcroy, Leila Bessahli and Margot Canal coming to York made perfect sense. The French domestic season has finished, the Knights have been hit by injuries and the French quartet could benefit before the World Cup in November.

“They went really well in our win over Wigan,” Anfield, a former England international player, said.

“I mean two of them flew in the day before. So they didn’t even get a training session with us. They seemed to really enjoy the game and the atmosphere of the day. And obviously people want to speak to them. So that was really nice.”

The coach suggested a player exchange such as this, which came about after York travelled to France for a joint training camp with Catalans, benefits the club in a multiple of ways.

“They’ve been really busy and involved seeing a few sponsors and what they’ve brought to the game. And then just things like we had a barbecue and they made some French food. Obviously there is a language barrier that we’ve had to overcome and they’ve learned a bit of English and we’ve had to learn how to say certain basic things in French. It’s just been a really interesting time, not just rugby based. 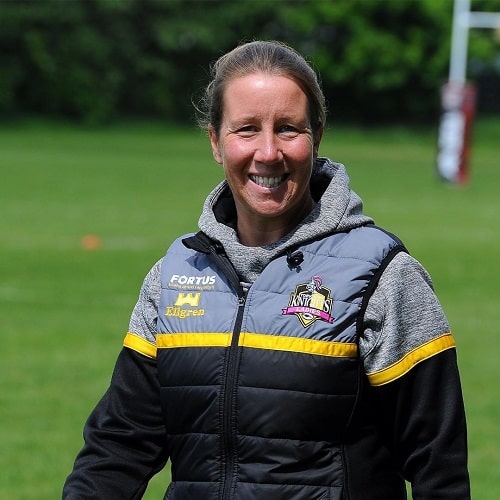 “Now that they’ve made some friendships, in the future our girls will be more inclined to go to France.”

Anfield, who is currently mentoring a coach in Uganda, is optimistic about the future of French women’s rugby league and would like to see a French based side enter the Women’s Super League competition.

“I think they just need more teams. At the moment there’s only three teams playing in their top tier. There are teams underneath that but they’re not at the same level. I think next year, they are going to four teams in that top level. So it’s obviously going in the right direction.

“I think the whole restructure or whatever with IMG with the men’s game will have positive consequences for the women’s game in the coming years. And, obviously the aim is to get a French team in the Women’s Super League. The costs around that would be pretty big though.”

Anfield and the Knights Ladies sealed their first-ever Betfred Women’s Super League League Leaders’ Shield on the weekend with a 22-14 victory over rivals Leeds Rhinos. Akpa and Bessahli played a role from the bench.

Lauréane Biville announced on Twitter she will return to England to play for Wigan in the semi final this weekend.